Do long division with decimal numbers and see the work for the calculation step-by-step. Enter positive or negative decimal numbers for divisor and dividend and calculate a quotient answer.

How to Do Long Division with Decimals

How far do you want to calculate the decimal places for the answer? Here are some examples:

Also see our Long Division with Remainders to see the work for long division with remainders. 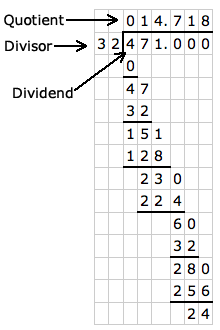 How to do Long Division with Decimals: Example

In this problem we divide 4.71 by 3.2 out to 3 decimal places in the quotient answer.

Long Division
Step-by-Step
3.
2
4.
7
1
Set up the problem with the long division bracket. Put the dividend inside the bracket and the divisor on the outside to the left.
.
3
2
4
7.
1
0
0
If the divisor is a decimal number, move the decimal all the way to the right. Count the number of places and move the decimal in the dividend the same number of places. Add zeroes if needed.

Since we are solving to 3 decimal places, add two trailing zeroes to the dividend.

Since 4 divided by 32 is not a whole number, the first quotient digit is 0.