This GPE calculator will find the missing variable in the physics equation for gravitational potential energy, when three of the variables are known.

What Is Gravitational Potential Energy (GPE)

Potential Energy is the stored energy of an object given its position relative to a body. Gravitational potential energy is one type of potential energy and is equal to the product of the object's mass (m), the acceleration caused by gravity (g), and the object's height (h) as distance from the surface of the ground (the body). 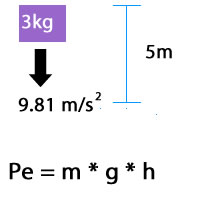 9.81 meters per second squared (or more accurately 9.80665 m/s2) is widely accepted among scientists as a working average value for Earth's gravitational pull. This figure is based on a measure of gravity at sea level at a latitude of 45°.

Gravitational acceleration (to three significant figures) for other planets and bodies in the solar system is as follows: